My book club recently read, “The Paris Wife” and very exactly as predicted in the prologue,

“I don’t want to say, Keep watch for the girl who will come along and ruin everything, but she’s coming anyway, set on her course in a gorgeous chipmunk coat and fine shoes, her sleek brown hair bobbed so close to her well-made head she’ll seem like a pretty otter in my kitchen.”

And so she was right – the story is of Ernest Hemingway’s first wife. First of four, so of course, they didn’t live happily ever after. Each page you feel it coming but you try to forget it and root for them anyway.

All in all, I would say the book is a pretty good read… but it is hard to put aside the fact that you know on page one that it doesn’t end well. The actual ending for Hadley is actually a bit gratifying, but with so many books out there… I don’t think I would recommend picking this one up… there are just too many great ones out there!

What did you think? Did you love it even though you knew the ending? 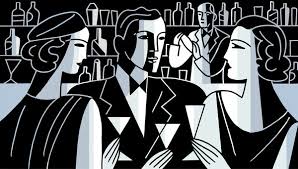 As I wrote earlier, we just had our inaugural Book Club meeting last week, and our first book was Rules of Civility. The author is Amor Towles, and when I was preparing our “discussion guide” I found this note to be endearingly humble:

“As someone who has written quietly for twenty years, the notion that a group might gather to discuss a book of mine seems something so fantastic it must be a mirage. So, if you’ve come this far, I owe you my heartfelt thanks.”

This was followed by something I wish I had seen much earlier than hours before we met:

“And if your reading group is meeting for dinner in New York somewhere between Canal and 34th streets, please let me know. If my schedule allows, I will try to stop by.”

Ah, how I wish I had known! Of course we were meeting between Canal and 34th Streets! If I could have somehow tracked down Mr. Towles and invited him to The Jane, it would have really set the bar.

But as I laid out previously – I’m going to focus book posts on a single thought or question for now. This one is from the discussion guide and one I probably talked the most about at dinner.

A central theme in the book is that a chance encounter or cursory decision in one’s twenties can shape one’s course for decades to come. Do you think this is true to life? Were there casual encounters or decisions that you made, which in retrospect were watershed events?

Two things about this – don’t you want it to be true? Is it just me, or is life not so much more exciting when at any moment, the smallest decision can change the course of your life? Sure, this is scary, and while I think it can be true, I don’t think it happens every time you leave your house, (which should make it all much less scary). But it is interesting to look back and see how the smallest decisions or memories led to the larger shifts, and the choices we agonized over often change in the blink of an eye.

Another story comes to mind – one that takes me back to Chapel Hill on NCAA Football Signing Day, spring of 2008. Luckily, I had a friend who lived down the hall who actually followed this Signing Day thing, and at some point I picked up from her that Carolina had benefitted from a surprise commitment. That no one saw coming!

Fast forward a few hours to the Duke / Carolina basketball game. I was sitting with some friends and introduced to two new boys who were talking about none other than Signing Day while we walked to the Dean Dome. I parroted whatever fact I had picked up from Sarah, I talked with the boys about how we were all so surprised that so-in-so actually signed with Carolina, and we moved on. And I never saw either of them again.

Until I “re-met” Hewitt at a friend’s wedding a year and a half later. And that exchange about Signing Day is what I remembered. And it’s what he remember too.

So here’s to the little choices and things we pick up along the way that might just change everything.

Yes, I finally got up the nerve to send out emails a couple of weeks ago that was somewhere between won’t you be my friend and don’t you want to come to my book club?

We had our inaugural meeting this week and a strong showing of seven people. I was quite pleased (and relieved!) with the turnout and the conversation. It was the perfect mix of getting to know each other, deciding who is going to order the Jane burger and who isn’t, did you like the book, have your 20s (thus far) really changed you… etc. I would definitely recommend The Jane for great food and a quieter, conversation-friendly atmosphere during the week. Also, definitely opt-in on the fresh cookies and milk!

So two notes moving forward about books and the blog – I like to read. A lot. And while I have quite a bit to say about books (just ask Hewitt), I have struggled with how to structure a post about them that isn’t merely a summary or doesn’t read like a college paper. So initially, my plan is to take a question about the book – be it one that I had or one I find reading other blogs, guides in the back of the book, etc, and answer that in a post. For now, I think that will provide direction and prevent literary ramblings.

Secondly, we have selected our books for our next meeting. That’s right – books, plural. We’re going to read Gone Girl and Dark Places – both by Gillian Fynn and hopefully discuss how the books are similar and different, what we think of her as a writer, her work, and definitely what everyone thinks of the ending of Gone Girl. But I won’t spoil that here.