Tonight when I got home for Christmas (!), my mom and I made ginger cookies, and they’re delicious!

We got the recipe from my brother-in-law, Matt – who happens to be my most avid commenter here on the blog. The recipe came from his mom and her family and so on, so before I post any top secret familial recipes I’ll have to get his permission. But I can show you the photos of our just-baked successes.

Matt and Cathleen aren’t here for the holidays yet. And neither is Logan or Hewitt. I am hoping that if I continue posting photos of the warm and gooey things coming out of our kitchen, we can lure them all here before the next batch comes out of the oven.

Another ploy to get them home? This lovely photo of our tree! (Also one of the first shots I semi-successfully took on manual.)

Last weekend, our friend Kristen threw a Plum Pudding Party. I’m pretty sure it was my first ever plum pudding experience.

Plum pudding is a British tradition with medieval origins. Contrary to its name, it (thankfully) doesn’t have plums in it. Nor does it have the texture of pudding. It is actually steamed for something like seven hours. So our friend and hostess was very gracious and monitored her stove top for something crazy like seven hours pre-party.

When she first unveiled the pudding it looked like this –

And then she  explained the delicious “sauce” to me. Butter and sugar and a splash of vanilla, I believe. (Clearly, my favorite part.)

While the flame burns, everyone sings “We wish you a Merry Christmas!” And it worked! Kristen’s family has done this for many years, but this was her first endeavor as the actual pudding lighter, and it was a success. 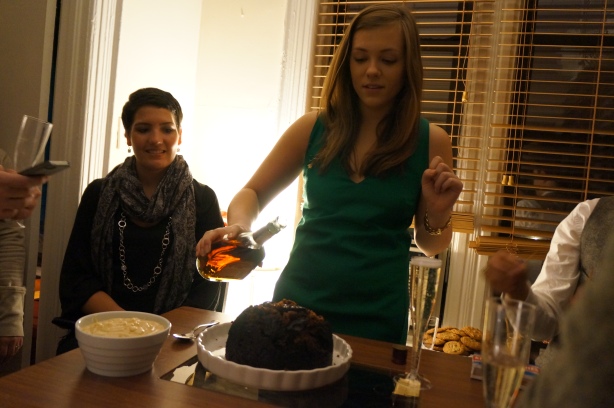 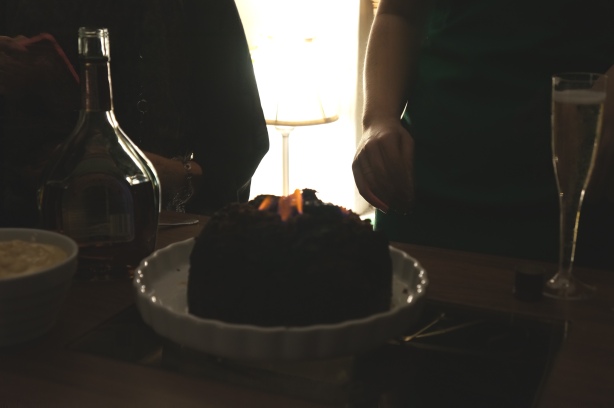 Thank you for including us in this new holiday tradition! After all, it felt like we were practically at Downton Abbey…

Have you noticed anything different with the header on my blog? :)

WordPress has a plugin available that allows it to “snow” on your blog. If you have a WordPress blog, you can enable the snow pretty simply –

Finally! For our wedding gift, our friends Nick and Rebecca (who were also our saviors during Sandy) gave us an adorable pasta maker and the ravioli attachment. Since the day we opened the gift, I have wanted to have them over to actually use it! It has been many months in the making, but finally, we broke in our pasta machine and made delicious homemade ravioli.

We started off with quite the spread of dips, hummus and pita, which worked out well… because it was basically midnight by the time our little spinach and ricotta stuffed pillows floated to the top of our boiling pot of salted water.

Earlier in the day we decided on the spinach and ricotta filling for our ravioli. This was partially influenced by the fact that I had ordered ricotta from Fresh Direct, hoping for 8 ounces, and somehow ended up with three pounds… all to make a white pizza! But this is the recipe we used for our yummy filling. I used part-skim ricotta and fresh spinach, so it was practically healthy, right? 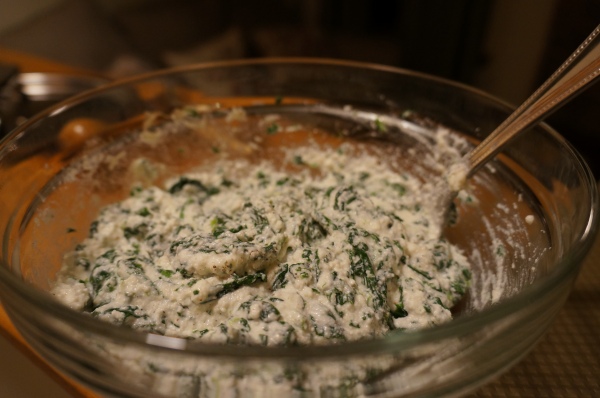 We did make the accompanying sage butter, and it was perfect. So perfect, the only photo I have is from my sage chopping job: 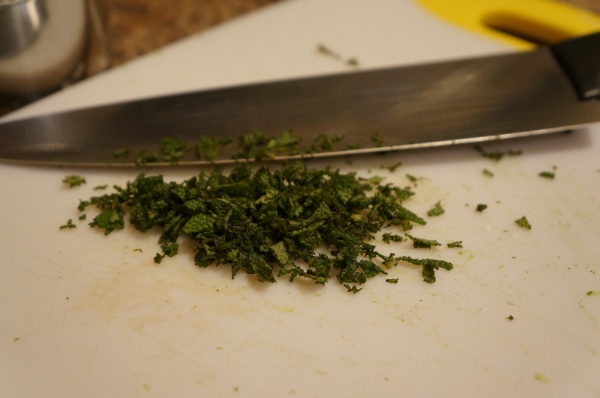 First step was to make our “test dough” to “season” our new machine. The dough is only egg and white flour – and you start by “building a well for the egg”. 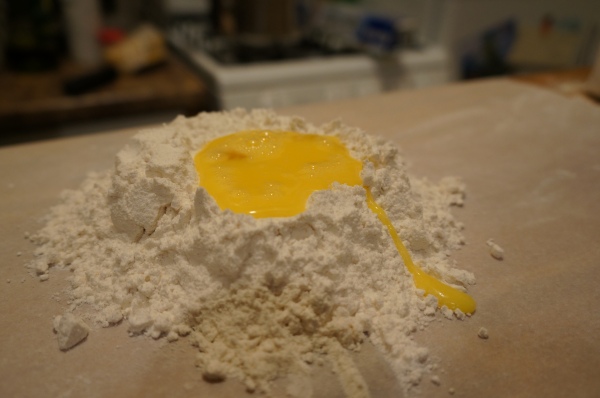 When we made our actual dough – which consisted of three times as many ingredients, we realized a bowl would be a lot more conducive to an egg well than our flat counter.

Rebecca was the resident dough maker-

And the boys our supporters (and cleaner uppers).

And after a little kneading and letting the dough “rest” we were on to rolling the dough through the machine.

Each time you roll the dough through the machine, you change the setting to make the dough thinner.

Once the dough is thinned, you crease it, put it in the ravioli machine and spoon the filling into it. And voila! Ravioli!

Once you separate all the individual ravioli, they cook in about three minutes. Fresh pasta cooks incredibly fast and float to the top when they’re done.

I was so excited (and hungry) by the time we were ready to eat them, I forgot to snap a picture with the sage butter.

We had so much fun making dinner, and we are so grateful to have such wonderful friends nearby. If you ever want a reason to linger over dinner and really spend time with people, I would recommend a homemade pasta maker. It’s work, but it’s the most fun I’ve had making dinner in a while.

So if you’re ever in the neighborhood and have some time to spare, let’s pick up a couple of pounds of ricotta and catch up over flour and eggs because a four hour dinner is the truest indulgence.

That’s what they say about New York – it’s the city that never sleeps. This is definitely true – there is always a restaurant or drugstore or food truck open, always something to do, see or take part in or a 10:00 dinner reservation to make. But I have found that we’re more a city that sleeps… late.

In Charlotte, if you wanted to catch the neighborhood still sleepy and just waking up, your morning run had to be at 6:00 am at the latest. Otherwise, by 8, you’re running way late for work, all the papers have been retrieved from the driveway and the day has long begun.

One thing I love about life here is the delayed start and end. I am not a morning person, nor have I ever been, and staying up later and starting the day later is a great fit. Here, if you’re up by nine on a Saturday or Sunday morning, the street is yours. The neighborhood is sleeping and the line at your favorite coffee shop is nil. By 11:30, you’ll have an hour wait for brunch… but I can handle having to be somewhere by 11.

So here’s to the city that rarely sleeps, but when she does, she sleeps in.

As I mentioned previously, I got a new camera for my birthday and am still trying to sort out how it works and everything that it can do.

That said – when I came across this campaign (which happens to be for my camera), I could totally relate. Someday I might graduate to a real semi-pro camera, but that isn’t today.

Check out the below for a humorous take on how people (presumably like me) use DSLR cameras to shoot, on… say, auto…

To celebrate the “hanging of the greens” in our home, I made a delicious white pizza to go well with our viewing of The Santa Clause.

First, heat your pizza stone with the oven to 450. I recently learned this is the best way to get the bottom of the pizza crisp.

Assemble pizza and drizzle top with white truffle oil. Creatively get pizza from counter to pizza stone already in oven, and bake for 8-10 minutes. 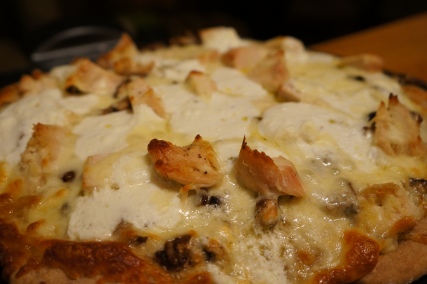 As I am writing this, I am sitting by our adorable (yet somewhat mini) Christmas tree, sipping the most delicious coffee, thinking about how much I love Christmas.

Hewitt and I started off December this weekend by going to pick out a tree. This is a bit different in Manhattan as 1. not surprisingly – they’re extraordinarily expensive and 2. you physically carry them home. Luckily in this case for us, we were in the market for the biggest small tree we could find to fit in our space, so it was also easier to carry home.

This photo, for the record, is to scale. 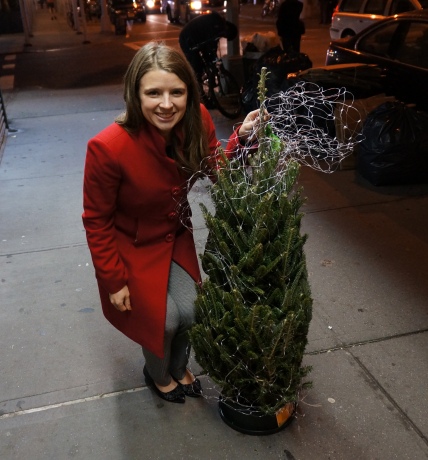 And with me still trying to learn about my camera, shutter speed, etc… this is the shot from moment Hewitt turned on our overhead lights.

And here is one with a bit more normal lighting-

So there you have it. Christmastime is here!

I have come across a number of recipes with brown butter in them, and let’s be honest, at the least “brown butter” is extremely intriguing.

I picked this recipe on pinterest to try both brown butter and a new twist on the traditional chocolate chip cookie… and let’s just say, I would recommend it.

You can find the full recipe here – I split the white flour half and half with whole wheat, and I  added an extra teaspoon of cinnamon.

What browning butter looks like. You heat butter in a saucepan over medium heat, stirring constantly…

Until it looks like this! A browned version that tastes almost nutty.

After letting the butter cool, you blend it into the batter,

Hewitt took these to his office, and we all agree – they’re delicious!