On Cinco de Mayo, Hewitt and I celebrated our one year wedding anniversary – I meant to get these pictures up sooner, but in the same way the last year has flown by, the last week or so has too. So I’m a bit late – but at least we celebrated on time even if I recap  later. We were lucky enough to head to Puerto Rico for a quick weekend getaway… and goodness, was the view perfect.

And also, my most successful use of the panoramic feature on my camera yet:

Smiley and a wee bit sunburned! 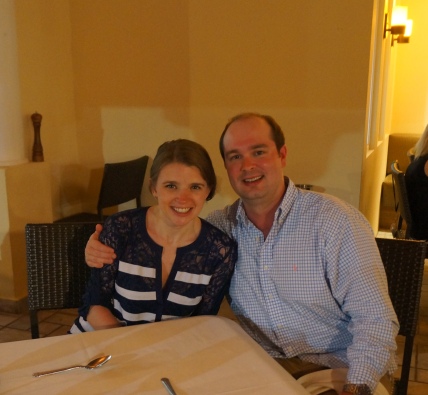 And sad to be heading back to the city so soon, but grateful for a few nights away filled with sunshine.

In true travel to and from NYC fashion – our flight on Sunday was delayed, so we had a decadent and romantic meal in the San Juan airport. And since our frozen wedding cake is in a freezer in North Carolina, I improvised with some Molly’s Cupcakes. Which I recommend if you’re in the neighborhood! 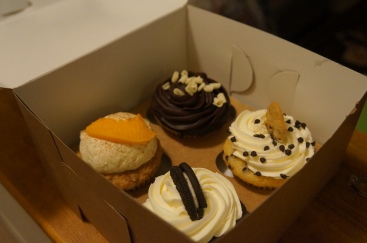 Here’s to many more years together – pretty pumped to take on the world together.

Blogging can be a lot like exercising or that pile of clothes on the floor… once I’m too tired to go to the gym or too tired put my clothes away, it’s always just a little bit easier to be too tired the next time comes around. So in that way, I am coming back from something of an unintended hiatus, and I’m not saying I was just too tired to blog for the last few weeks, I was just spending my energies elsewhere and I guess I needed a break. But I’m back!

And since late February –

I learned to make homemade enchilada sauce with chipotle peppers in adobo sauce – more on that decliciousness to come. 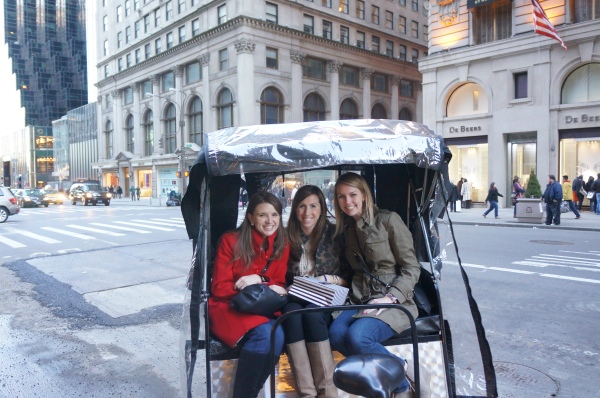 Keep in mind, in pricing quoted with pedicab drivers are per person. (Read: they’ll definitely rip you off.)

And tried my first St. Patrick’s Day dinner like my mom would make – corned beef and cabbage + carrots, turnips and cauliflower mash (instead of potatoes!). I would say it went pretty well – we didn’t have much leftover but cabbage! And you can only eat so much cabbage anyway.

That’s a very brief summary, but I have to save the rest for all the posts I’ve been backlogging in my head… stay tuned and come back!

My sister and brother-in-law visited this past weekend, and I think we did a prettay good job showing them the city condensed into about three days – which is actually quite difficult.

We kicked off Saturday morning with the most involved brunch I have ever made – thanks to Smitten Kitchen, I tried some new recipes: spinach strata, cinnamon chocolate chip bread and made one up –  citrus fruit salad, accompanied by some lovely hickory smoked bacon fried by Hewitt and fresh OJ for mimosas courtesy of Fresh Direct. More on the recipes and deliciousness later- but I’m definitely planning to make them all again. For sure.

(Photo doesn’t do the table justice.)

For my sister’s birthday, we gave her tickets to see the NYC Ballet perform Sleeping Beauty – and it was perfect. Truly, the sets, the feet, the costumes… it all reminds you of the importance in slowing things down and taking it in. Cathleen and I were kids again watching the girls in tutus we wanted to be, and although we never were, it’s a memory and a dream we get to keep and an appreciation for been a part of it.

We snapped a few pics when the boys met us at Lincoln Center, post-ballet – 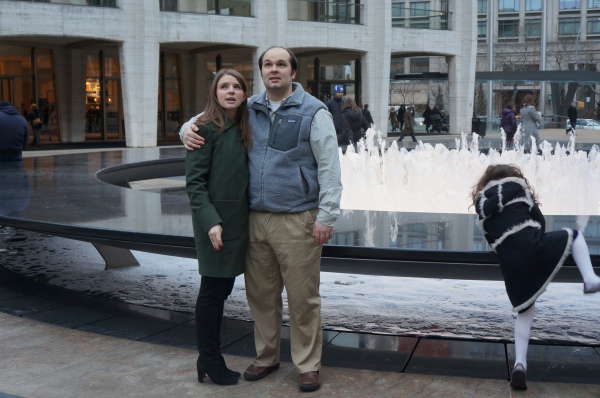 Sunday was freeeezing, so we sought warmth and caffeine and jewelry at Chelsea Market, and I spotted this gem painted on the brick.

We didn’t last long on the High Line – the wind was insane, but we managed a quick picture. 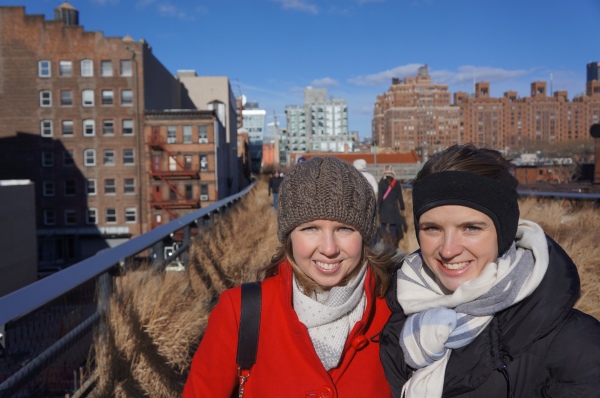 Survived / enjoyed Top of the Rock – even though it was so windy the 70th floor was closed… and the 67th and 69th perhaps should have been! It was so windy. And freezing. 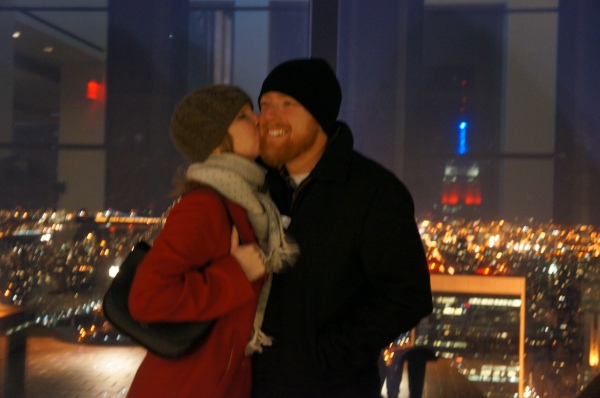 We look a bit freezing. And windblown. 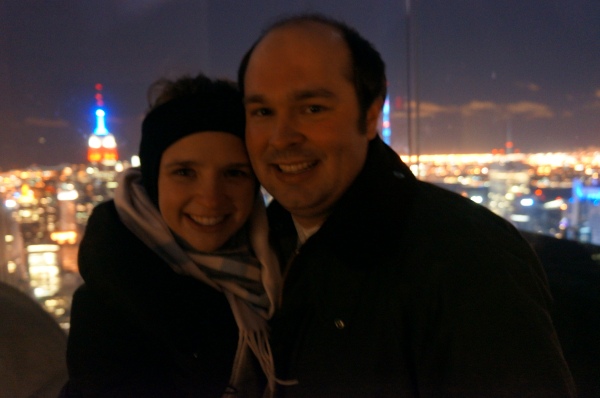 Monday, for President’s Day, we took the Staten Island Ferry to see the Statue of Liberty, took on the subway, saw The Big Piano at FAO Schwartz and saw Central Park / took a quintessential photo.

Not my best face, but a funny photo, framed by the between-bench-space I always gravitate to on the subway… 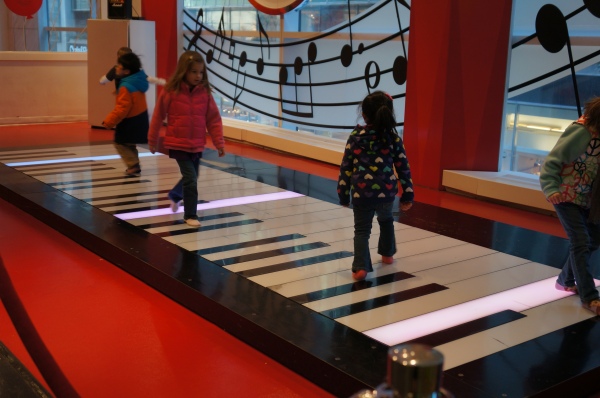 Cathleen was a bit more cavalier with her swing, but Matt, you’ll get it.

Like all weekends, it came to an end too soon, but since we’re family, I know we’ll get to do it again. I am quite pleased with how our little apartment has fared with guests so far  – thankfully, no one has come in expecting their own room, etc… but it just feels 20-something and cozy to have your sister and brother-in-law on an air mattress in your living room, measured to fit perfectly between the coffee table and writing desk, waking you up to let you know the coffee pot hasn’t come on yet.

So please, come back and see us.

Last week, we had some crazy temperatures… very few people are actually accustomed to highs in the “17s”. (This week we have had equally crazy weather, ranging from 30-50, but when it was a balmy 14, I was constantly craving comfort food. I had a  fancy mac & cheese at Beecher’s Cheese and decided to try my hand at a new interpretation of the old classic, potato soup.

I stumbled across the recipe and thought it was worth giving a try. So we had loaded baked potato soup, with cauliflower, to make it “healthier”! Check out the recipe here, and the pictures below.

The “lightening up” comes from steaming cauliflower and then blending them in with the potatoes to maintain the creaminess of the soup (it’s pretty close!), but have fewer carbs, calories, etc… or rather, allow you to use more cheddar cheese and feel fine about it.

Add the steamed cauliflower and peeled and chopped baked potatoes to the broth, and use an immersion blender to mix together… 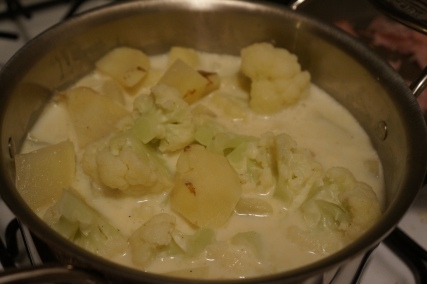 Top with bacon (we used ham because that all I had!), chives and cheddar cheese and enjoy a cozy meal. Especially when it’s under 20 degrees outside.

Next time I make it, I’ll save part of the potato (or add a third one) to add post-blending. I’m a bit of a texture person, so I would appreciate keeping some chunks of potato around to balance it out.

But otherwise, I would recommend this and will definitely make it again!

I don’t actually like chickpeas. Or hummus. Or anything that is really very mushy, but Hewitt (and most of the world) loves chickpeas and hummus, so I decided to make roasted chickpeas for him. I wanted an excuse to try this recipe.

I found the recipe on the Food Network and with little knowledge of what makes chickpea goodness, selected it because it was spicy. I followed it to a T, basically. I added a generous shake or five of cayenne pepper and another five shakes of chili powder.

Hewitt claims they were good! You should try them because from what I’ve read they’re a healthy and filling snack. :)